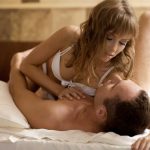 We all know the most obvious reason for having sex. And although it is a good enough reason that doesn’t require much further persuasion, it is still interesting to learn about additional benefits of sex.
The healing power of sex used in treating a variety of neurological illnesses and depressions is based on the substances produced during orgasm called endorphins and serotonin. An endorphin is also known as the hormone of happiness and serotonin helps our body fight stress and controls the correct transmission of neural impulses in the brain.

So here are the most common benefits of having regular sex:

1. You sleep better after having sex. It has been scientifically proven that people who have sex regularly suffer less from insomnia due to endorphins that are produced after having an orgasm. They give you the feeling of happiness and peace, and relax your cells, which makes you sleepy.

2. You are more productive at work. Good sex contributes to feeling well throughout the whole work day. Your body receives the necessary amount of hormones, which keeps you in good shape. Endorphins make you feel calm and give you self-confidence while serotonin makes your brain think faster.

3. Sex cleanses your whole body. When you have sex the blood is being pumped faster, your breathing becomes more frequent; your blood gets enriched with oxygen and “washes out” all the internal organs, including heart and liver. At the same time all the toxins are eliminated out of your body through the skin via sweat.

4. Sex strengthens your heart and blood vessels. If you have sex regularly, the level of your sexual hormones, testosterone in men and estrogen in women, is increased. Testosterone strengthens bones and muscle tissue and promotes heart function, while estrogen prevents heart illnesses in women. And of course having sex leads to increased blood flow which consequently strengthens the blood vessels.

5. Sex makes you slimmer. Usually during passionate sex we unconsciously perform physical exercises that we most likely would not be able to repeat in the gym. This keeps the muscles toned plus helps burn the calories, which on average amounts to 150-200 calories per sexual intercourse.

7. Sex cures headaches. The hormone called oxytocin is released during sex. It is mainly responsible for our orgasm and the production of endorphins, but also it can relieve spasms and pain provided that it is produced in large quantities.

So the next time your girl complains about a headache, don’t let that be her excuse not to have sex, but instead let her learn firsthand about the healing power of sex!

Guys, Use This Food For Fantastic Erections